Basketball England is proud to announce the winners of the 2019 West Midlands Region Volunteer Awards.

One of the worthy winners is Funganayi Chogugdza (Young Volunteer of The Year) from the City of Birmingham Rockets. "Nash" as he is known at the club is heavily involved in coaching across all of the programme's younger age groups and has regularly attended coaching conferences to develop his skills further. Nash’s involvement in the Aspire Programme as a young coach has further illustrated his commitment to developing young people both on and off the court.

Also recognised is Jamie Richens (Teacher of The Year), who works at Alcester Grammar School, for his efforts in helping coordinate the Jr. NBA programme at his school and Joe Hodgson (Referee of the Year) who continually displays an exemplary standard of officiating when refereeing fixtures within the region. 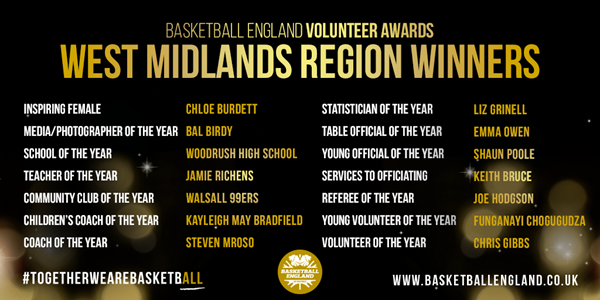 “Congratulations and a big well done to all the volunteers selected from the West Midlands” said David Butler, Delivery Director for Basketball England. “I'm delighted for everyone chosen that their efforts have been recognised with a regional award and I look forward to potentially seeing some of the winners at the National Awards evening this September”