FocusHoops' Darren Paul had a quartet of D1W games to look over this weekend as he also took in a thrilling WNBL National Cup final between Stockport and Solent.

As a writer, commentator, podcaster and more, Darren is once again tasked with selecting the league's Player of the Team, plus four other notable performances for his Team of the Week as well. 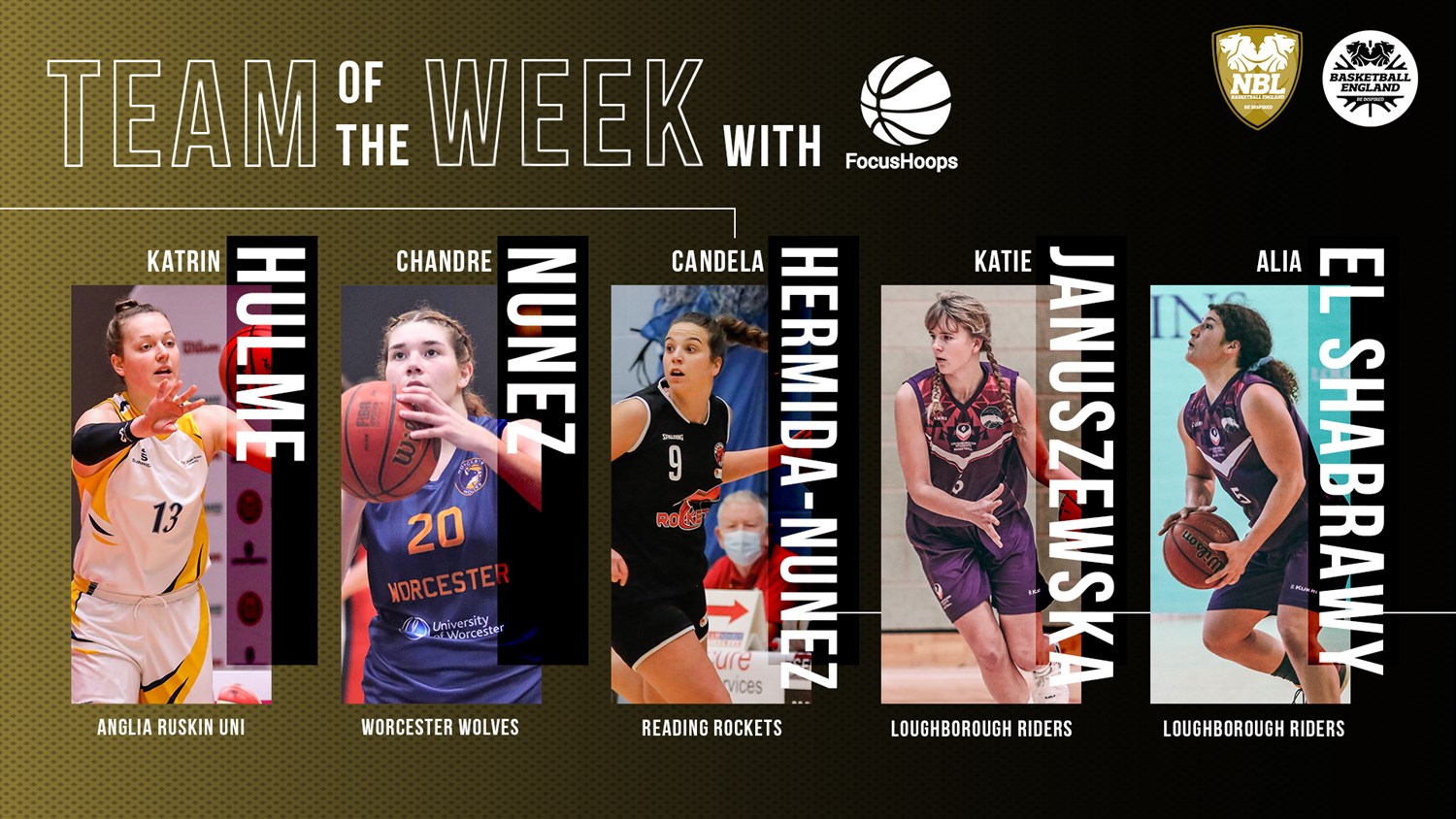 Katrin Hulme clinched Player of the Week honours with a monster performance against playoff hopefuls Cardiff Met Archers, pushing her side to a  74-57 victory.

Hulme came up with one of the highest-scoring performances of her career with 29 points on 60% shooting, going 9-13 from inside the arc and an excellent 11-13 at the stripe, after being fouled eight times in the contest.

As always 'The General' led by example, attacking the glass to pull down 15 rebounds, swiping four steals and sending two shots back as Anglia Ruskin keep fighting for a top-two finish in the WNBL.

Chandre Nunez did everything she could in Worcester’s 78-70 loss to Reading as the versatile American finished the game with an impressive double-double.

Nunez was the only Wolves player in double digits scoring with 27 points, getting into a shoot-out with Reading's Hermida Nunez. Sinking 4-6 from outside and going a perfect 7-7 at the line, Nunez pulled down a game-high 13 boards, four offensive, and dished two dimes.

Nunez continues to impress for Worcester as they adjust to life after big departures to the WBBL and if they hope to make the top eight, they'll need her form from recent weeks to continue to the end of the regular season.

Candela Hermida Nunez had a performance for the ages on Saturday in a crucial win for Reading over their playoff rivals Worcester, taking the game 78-70. The win on the road also allowed the Rockets to leapfrog the Wolves into the playoff places.

Hermida Nunez shot well, hitting 45% of her attempts, raining them down from outside as she hit 5-7 whilst also holding her nerve to go 3-4 at the stripe.

It was a well-rounded effort from the Rockets' captain as she also pulled down six boards and fell agonizingly short of a double-double, finishing with nine assists.

The impressive guard topped off her afternoon's work by swiping five steals in a game with potentially huge ramifications come season's end.

Katie Januszewska continues her excellent start to 2022 with another selection for my Team of the Week.

She did it here courtesy of a very efficient 13 points 12 rebounds double-double as the Riders took down the Flyers on the road.

Januszewska is leading the way in the Rider's bid for the WNBL league title, and this weekend saw her at her efficient best, making 71% of her shots, including 2-4 from beyond the arc.

KJ attacked the glass on both ends as well, finishing with four offensive boards and nine defensive, whilst also dishing out two assists and taking back two steals as the Riders maintained their pressure on leaders CoLA.

Another week, another appearance for Alia El Shabrawy in the Team of the Week after a double-double performance for Loughborough Riders against Bristol.

El Shabrawy pulled off the double-double that guards pride the most with 26 points, including a game-high four made triples, to go with an impressive 13 assists.

Not content, El Shabrawy also added six rebounds, one offensive, and put the work in on the defensive end to swipe five steals in an all around excellent display.

The Egyptian guard has been a shining light for the Riders this season and with this weekend’s performance, that form shows no sign of changing any time soon.

The D2 North’s Stockport Lapwings took what is surely the victory of the season on Sunday as they clinched the WNBL National Cup, overcoming Team Solent Kestrels 81-77 in overtime.

Their Cinderella rise through the competition, including toppling D1 standouts CoLA and TVC, was capped off in fantastic style with a famous victory. It was also spearheaded by one of the most influential members of the Manchester basketball community in Jade Butters.

Butters finished with a game-high 26 points, eight rebounds and seven assists, draining five triples and making 9-10 shots at the line.

It was a worthy MVP performance, and a final that will no doubt live long in the memory.

NTU get off the mark against Lions

Nottingham Trent University finally gained their first win of the 2021/22 season with a 52-45 victory over the London Lions, thanks in part  to a huge 21-9 final quarter.

Trent were led by the positive play of Ines Guerreiro, who finished with 21 points in the contest, including 8-9 at the line having been fouled nine times.

NTU will no doubt be buoyed by this enormous victory over the 11th placed Lions as they battle to remain in D1 for next season.