FocusHoops' Darren Paul looks over week 20 of the WNBL to select another Team of the Week. 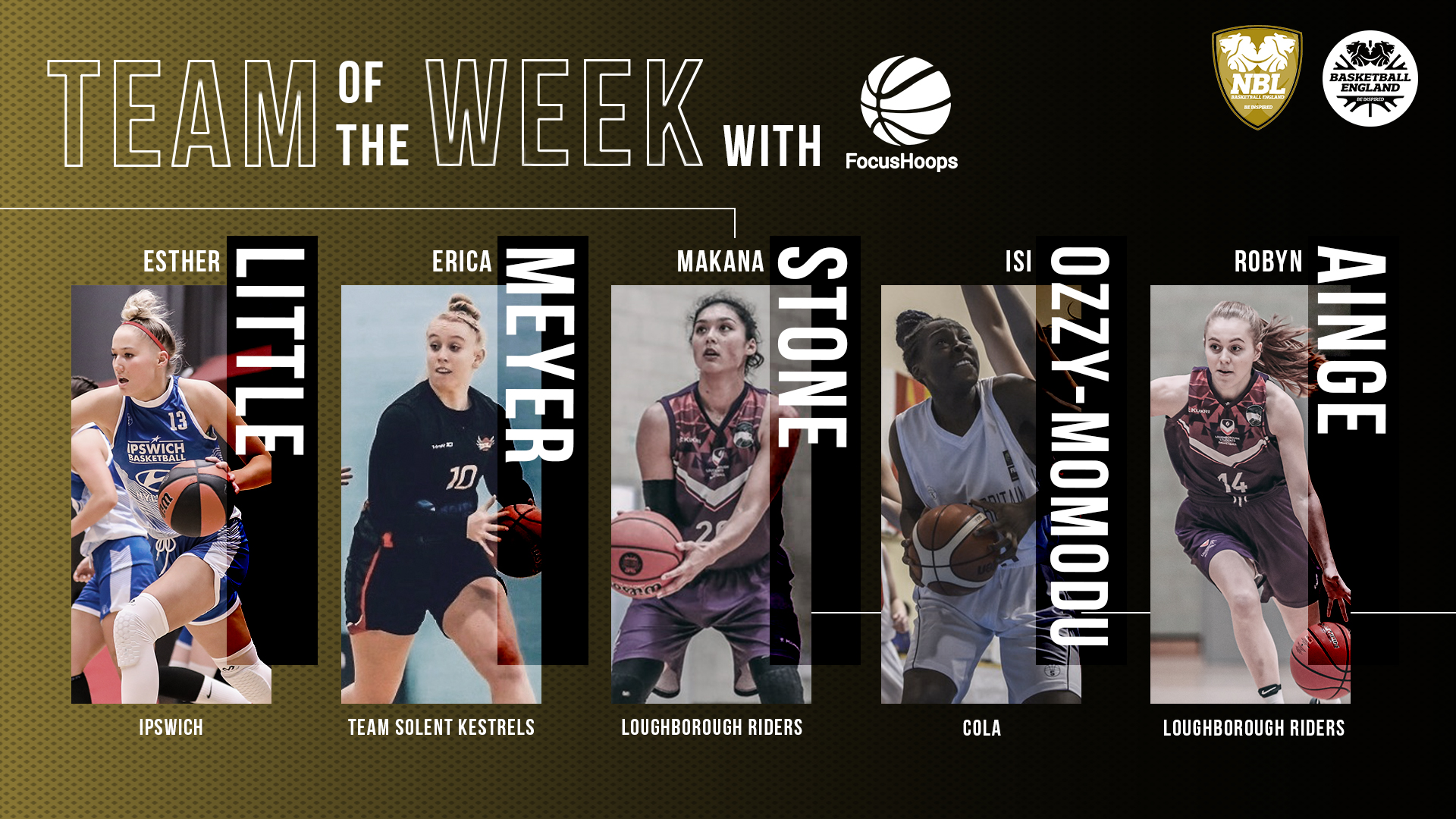 Another weekend, another triple-double watch, this time an incredible effort from Esther Little who did it on both ends pulling down another eye-watering high number of rebounds and sent back 12 shots on her way to player of the week honours.

The Gonzaga commit was responsible for half of Ipswich’s defensive boards and shot 57% from inside the arc as Ipswich defeated Cardiff comfortably in the Welsh capital’s side first game of 2021. Little is the WNBL D1’s rebounding leader with 18.6 per game to compliment her 12.6 points per game as she continues to dominate for Ipswich.

Erica Meyer recorded an efficient, team leading, double-double with 21 points and 11 rebounds, hitting 8/12 from the field.

The 23-year-old American is having a solid season scoring 9.7 points per game and 6.7 rebounds and exceeded that in a tight win over Cardiff Met Archers on Sunday. With the happy news for Kristztina Velkey, Team Solent Kestrels will need Meyer to come up with big performances and Sunday was a big performance as she led her side to an important win that keeps Solent in the hunt for a high playoff birth.

WNBL D1’s second best rebounder Makana Stone continues to impress for Loughborough as she put in an all-around solid performance in their win over Barking Abbey London Lions II. Stone scored 12 points shooting 85% from inside the arc, pulled down 8 rebounds and dished 4 dimes.

Stone, who is ranked fifth in steals in the WNBL D1, also contributed on the defensive end grabbing 3 steals, whilst doing a good job of protecting the ball coughing up just one turnover and committing one foul, doing all of this in just under 22 minutes as Quintero Cano did a great job balancing minutes.

Stone with the steal and Hikin finishes for two!

Izi Ozzy-Momodou, not for the first time this season, but in an excellent performance on the glass pulling down 17 rebounds in a huge 62-71 win over the Reading Rockets. The Class of 2022 Rookie led in the rebounding column, as she has done all season exceeding her average of 11.5 boards as her side clinched a 9 point victory over their rivals.

Ozzy-Momodou complimented her work on the glass, with two steals, 7 points scored at 50% from the floor and one assist in a game led by the scoring of Simona Henshaw and passing by Emily O’Connell.

Another captain’s performance from Robyn Ainge as she scored 13 points and eight rebounds in Loughborough’s commanding victory of Barking Abbey London Lions. Ainge struggled from inside the arc but hit 4-8 from three point land whilst tying a game high in rebounds and scoring a game high in assists and steals, doing a little bit of everything to ensure victory for her club.

Ainge has been an important contributor all season for Loughborough, averaging 13 points and 6.2 rebounds and this weekend was no exception, and the Riders will be counting on her the rest of the season as they chase a high playoff berth and look to pressure Ipswich all the way.

CoLA Southwark Pride picked up two wins this weekend against Reading Rockets and then Thames Valley Cavalliers, both in impressive fashion. The South London outfit had played just once in 2021 prior to this weekend and came away with two crucial victories to see them go 5th in the WNBL D1 with a 4-3 record.

Simona Henshaw was the leading scorer for Pride in both games and was supported with a team of the week performance from Isi Ozzy-Momodou and a fine performance from Emilie Black to name just two standouts for this young team. These victories keep Southwark Pride fully in the hunt for a good playoff birth and it will be exciting to see them build from here.