FocusHoops' Darren Paul is back once again as he names his Player and Team of the Week from the WNBL.

As a writer, commentator, podcaster and more, Darren had six Division One games to comb through for top performances and noteworthy contributions. 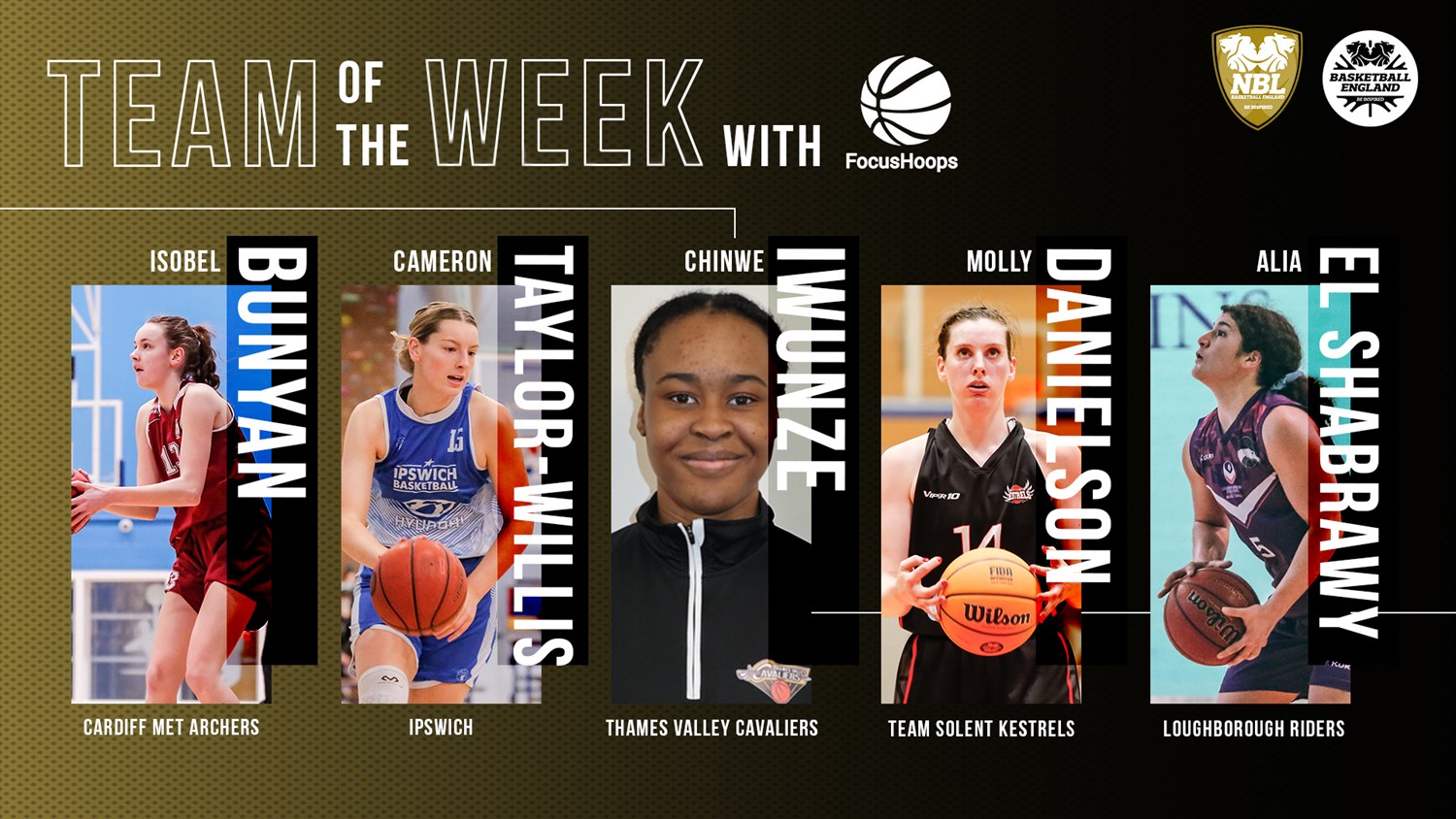 After making my Team of the Week last time out in a losing effort, Isobel Bunyan takes Player of the Week honours here after an incredible all-around performance in Sunday’s 72-65 victory over Reading Rockets.

Bunyan finished the game with eye-wateringly high numbers in all positive statistical categories - 18 points, eight rebounds, seven assists, seven steals, six blocks on 66% shooting, including 2-4 from outside the arc.

Cardiff Met Archers II will be hoping for more of the same moving forward from Bunyan as they eye up a potential playoff place in 2021/22.

Cameron Taylor-Willis is picking up where Esther Little left off last season with monster rebounding numbers for Ipswich, pulling down 17 this weekend to go alongside 14 points in her side’s win on the road at London Lions II.

CTW was an integral part of Ipswich’s triumphant campaign last season and looks set on ensuring that the side she now captains are in the hunt come season’s end.

Taylor-Willis did well taking care of the ball in the capital, committing just a single turnover, whilst chalking up an assist and a steal in Ipswich’s three-point win.

Thames Valley Cavaliers gave Nottingham Trent University a torrid time this weekend, coming away with a 79-35 victory. In the lopsided contest, the performance of Chinwe Iwunze leaps out because of the sheer efficiency involved.

Iwunze was on the court for just 15 minutes but was able to score 18 points off 50% shooting, pulled down 11 rebounds, including a whopping nine off them on the offensive glass, to help her side in take away the victory.

The guard was able to complete this remarkable performance whilst not being blocked, turning the ball over or fouling, yet she was fouled herself on three occasions. All in all, it was an excellent outing.

Loughborough, Solent, CoLA and Ipswich continue to lead the way with unbeaten 2-0 records, whilst Anglia Ruskin and Nottingham Trent both picked up an L each to begin their new campaigns.

Molly Danielson had about as perfect a day as you can playing basketball this weekend. Coming off the bench, Danielson not only contributed in a 76-67 win for Team Solent Kestrels over the Bristol Flyers, she did so whilst not missing any of her 10 field goals, pulling down eight rebounds and registering one assist and one steal, whilst being fouled more than she fouled herself.

The Kestrels are a team who are always expected to compete in the WNBL and this year is no exception. With more performances like this from the likes of Danielson, the Kestrels will guarantee themselves a place in the chase come season’s end.

Alia El Shabrawy made a huge impact for Loughborough this weekend as they took a home win over the Worcester Wolves.

Just four assists shy of a triple-double, El Shabrawy had a 20-10 double-double off 50% shooting whilst lighting it up from outside, making 3-5 from long range.

Whilst she did turn the ball over some (4), she more than made up for that with four steals of her own to go with those six assists, finishing with a game-high +/- of 28 in the 83-61 victory,

Saturday will go down as a very good day for the El Shabrawy and having been an honourable mention for me last week, her performance made her a sure-fire Team of the Week selection here.

Consistency is key for TVC

Thames Valley Cavaliers recorded a statement victory on Saturday over Nottingham Trent University, beating the Midlands outfit 79-36 on the road.

Led by an incredible scoring blast from Chinwe Iwunze, a 13-point haul from captain Eleanor Bishop and 10 boards from Faith Okwuosa, TVC ran away with the win whilst sharing both the minutes and the scoring load.

Only once were NTU able to score double-figures in a quarter, and none of their players were able to hit double-digit scoring. NTU will have better days and will no doubt be looking to get back on track immediately, whilst TVC will be buoyed by a strong team performance following their own week one loss.

Ipswich edged out the London Lions on the road by just three points to keep their winning streak going from the end of last season.

The reigning champions were pushed all the way by the East London programme, but in the end were able to manage the game clock and the situation to leave London with a valuable W.

Both sides battled it out with just six player rotations, and despite some late heroics from the Lions, Ipswich had done enough in the opening quarter to squeak the victory.

The Suffolk side were led by TOTW player Cameron Taylor-Willis' excellent double-double whilst the Lions were paced by 24 points from Fatmata Janneh, who despite excelling across the full 40 minutes, wasn’t able to get her team over the line.