With a few divisions slow to get going as we begin 2020, we have three Player of the Week awards to present for week 14 of NBL action.

Below we've got our weekly winners for NBL Division One. Division Two and Division Three, and congratulations to the trio of players selected!

Following a 113-78 road win against Bognor, Cardiff City's Lewis Tucker has been selected as our D3 Player of the Week.

It was a close run thing between Tucker and RCT's Rhys Williams, who also dropped 42 points in week 14, but we went with Tucker as he helped Cardiff to their 7th win of the season.

Tucker's performance will have surprised few in the South West Conference, with the talented shooter scoring over 25 points in three of Cardiff's last four games to end 2019. 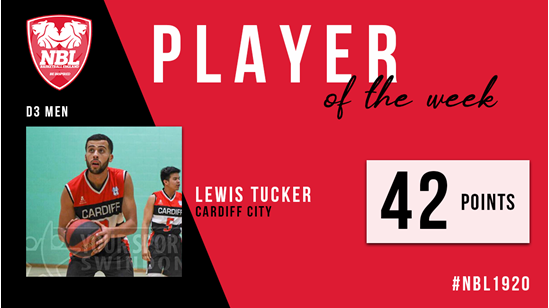 Beating a conference leader is no easy feat, but Andre Gayle's contribution for Manchester this weekend helped the Magic defeat Team Newcastle, earning Gayle D2M Player of the Week honours in the process.

Gayle scored a game high 25 points to go with six rebounds and two assists for a final efficiency rating of 25. The victory also takes Manchester to within 4 points of Newcastle in top spot, and the Magic still have a game in hand to close that gap even further.

"It's a great start to the new year for me and the team," said Gayle. "We hope we can continue to play at the same level." 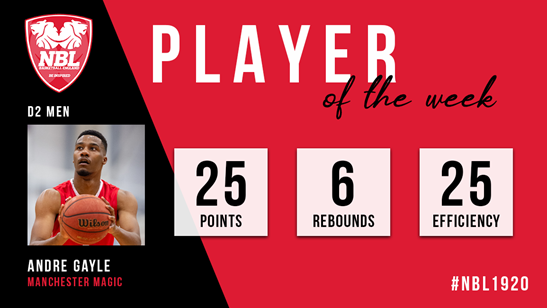 A 21 point, 10 rebound double-double in a Midlands derby was enough to secure Tre Wilford the D1M Player of the Week award.

The Trailblazers hit the road and beat local rivals Leicester 86-69, thanks in no small part to Wilford's efforts, adding five assists and three steals to his double-double performance.

The win helped Derby to solidify their playoff push, creating a four point gap between themselves and Leicester in the 8th and final playoff place.

"It's an honour to be recognised for the award, playing Leicester has always been a tough game," said Wilford.

"I found myself in the right place at the right time often and I was able to make the plays."

"I'm delighted for Treshawn because he plays so selflessly, putting the team first and doing whatever he can to help the team be successful," added head coach Matt Shaw.

"Him winning an individual award is really nice. He's having a great season, his overall stats are incredible".

'We love playing together' - GB confident for Olympic qualifier