With some impressive performances across the NBL in week 16, selecting five players for weekly honours was a tough task! Still, we've managed to finally single out our selections, and congratulations to all the players chosen.

After previous taking home this award in week 7, RCT Gladiators' Lloyd Williams is once again our D3 Player of the Week.

Helping RCT to a 91-65 road win against the Oxford Stealers, Williams dropped an impressive 37 points to move his side on to 9-1 on the season and 2nd place in the South West Conference.

"I would like to thank Basketball England for this prestigious award," said Williams.

"It's an honour to have this award but at the same time I recognise the hard work and effort made by my team, coaches and organisers in our club." 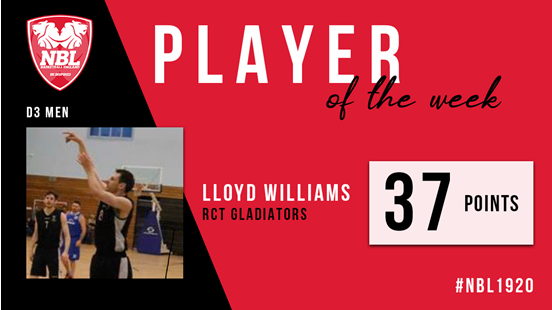 Mekdes Kinfe has been chosen as our Player of the Week in D2W after a 30 point performance.

Helping her side to easily overcome Northamptonshire Titans 78-28, Kinfe was a productive outlet for her side all afternoon long.

"Receiving this award has motivated me to always make sure I leave my game on the court with no regrets," commented Kinfe.

Head coach Roz Mason added: "Totally deserved, Mekdes Kinfe is one of the the hardest working players on the team and gives her best both in practice and during games. She makes coaching a joy."

Team Newcastle University continued their reign at the top of D2's Northern Conference, thanks in part to Player of the Week Tom Horvat.

Coming up against a tough Charnwood outfit, Horvat pushed his side to an 87-80 win with 37 points, seven rebounds, five assists and two steals.

"I’m very excited to receive this award, but even more excited that our team pulled out a great win Saturday," said Horvat, who finished with a 35 efficiency rating.

"We’ll need that sort of effort every week if we want to stay at the top of the table and be promoted."

Zahra-Diana Serrieh has been chosen as our Player of the Week in D1W.

Struggling near the foot of the standings, Serrieh came up with a strong 28 efficiency performance in week 16 to help Barking claim an important 68-63 road win against Loughborough.

With a 20 point, 15 rebound double-double to go with four assists and three steals, Serrieh was a real difference maker in a must win game.

"Basketball gets more and more satisfying when players are feeding each other with energy and competitiveness, this is how I have got my teammates back and they have got mine, and now we are working on consistency so we on to the next one," said Serrieh.

Coach Tope Alli-Balogun added: "It's a great accomplishment for Zahra and the team. Performances like that come from confidence in yourself and trust from your team mates."

After shooting a perfect 14/14 from the field and putting on a clinic in the paint, Thames Valley's Hakeem Sylla was a logical choice for the D1M Player of the Week.

Sylla was in unstoppable form as the Cavs beat Liverpool 111-77, with the forward's 29 points and flawless shooting performance the icing on the cake.

After previously winning the D1M award back in week 5, Sylla is renown as being a fierce presence on the glass and the match up with Liverpool proved to be no different. Sylla added 16 rebounds , four assists and four steals to his points haul for a final efficiency rating of 50.

"I’m deeply humbled to be named Player of the Week," confessed Sylla.

"2020 has started well for us, the coaching staff and the players we are all working hard to keep this dynamic."

Head coach Robert Banks added: “I know there were some outstanding performances across the NBL last weekend, so it is extremely pleasing to hear that Hakeem was named as Player of the Week.

"He is a very special player, who works hard, is an outstanding teammate and a pleasure to coach. His performance on Saturday was simply outstanding as was his stat line."