Five D1M games accompanied the NBL National Cup final this weekend to give Rebound's Chris Hughes his potential choices for this week's Player and Team of the Week.

Chris, a content producer, YouTube host and commentator, saw Solent claim their second National Cup title in a row, whilst there were important league wins in the title hunt for Thames Valley, Hemel and Worthing.

Have your say on this week's choices and give a shout-out to the players you think deserve one using the hashtags #NBL2122 and #ReboundTOTW . Don't forget to tag us! 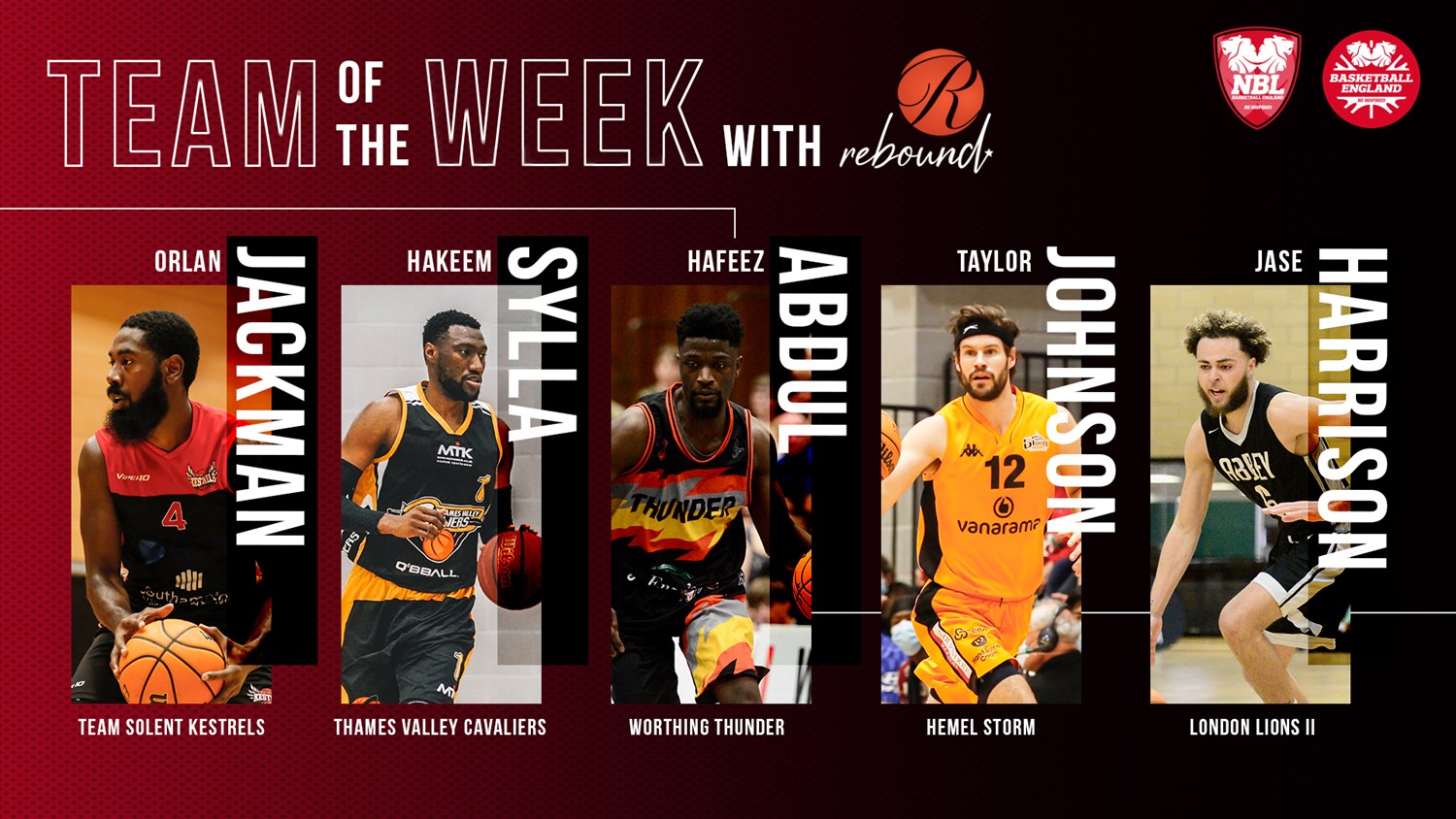 In an 18:04 cameo that only spanned the first three quarters of the National Cup final, Jackman was the hot hand, only missing once in a lights out display.

Newcastle really didn’t have an answer for how to stop the former BBL man, with the 2018 Commonwealth Games representative continually finding space in the paint and using his extensive experience to make being the go to option on offence look easy.

Jackman heavily contributed to Solent’s largest scoring run with big plays at both ends of the floor. He finally checked out half-way through the third after netting the shot the pushed Solent's lead to 29 points.

Hakeem Sylla put in a Player of the Week worthy performance in Thames Valley's 11 point win against ninth place Bradford, who are yet to beat a top eight side this season.

As is usually the case, Sylla’s rebounding was crucial versus a physical Bradford side, but the forward was also key on the defensive end as his five steals contributed to pretty much all of the Cavaliers’ 12 points from turnovers.

In a warm up to next weekend’s top of the table clash against rivals Solent, Worthing's Hafeez Abdul put on a shooting clinic to enjoy a stat line of 60/60/80. As one of the stand-out signings of the season, the former Hemel man wasn't too far from collecting the Player of the Week award, either.

Abdul is revelling in a starting role and managed to still get his shots off while being the most fouled player on court (7 from 21 total fouls in the game).

Leicester did everything they could to slow the forward down, but it still wasn't enough.

Worthing Thunder moved four points clear at the top of the standings as they beat Leicester Warriors 95-73, led by a huge 35 point outing from Hafeez Abdul.#NBL2122 | #GameTime

A vital fourth quarter showing earned Taylor Johnson a starting berth in my Team of The Week.

Despite being strong favourites this weekend, Hemel Storm went into the final frame of their game against Loughborough leading by just a single point, and with 4:36 to go that advantage had turned into a four point deficit.

Cometh the hour, cometh Taylor Johnson. The high IQ guard netted 10 points and affected the game at both ends as part of a team effort to ensure Hemel scored 23 unanswered points for what in the end looked a comfortable victory.

The former Ivy league star also flirted with a triple-double while being the most fouled man on court as the Riders tried everything, fair or foul, to try and stop Johnson getting into a rhythm.

Jase Harrison flirted with a triple-double in a stand-out performance to keep the seventh seeds in the playoff picture.

The captain led his ‘pride’ with some efficient shooting with a stat line of 60/60/100 while as a team London Lions II netted a meagre 33FG%.

The captain took more of a playmaking role in the third quarter which essentially called game with London dominating the frame at both ends to take it 26-6.

Solent put on a classic performance to seal more silverware

For one of the first times this season, Sunday's NBL National Cup final saw Solent name a full strength line up. The result was spectacular, showcasing a team performance that got them a mammoth win and even allowed coach Guymon to check out game MVP Orlan Jackman with almost 14 minutes still left on the clock.

It could be said that Solent have played in second or third gear so far this season, on Sunday however they were surely cruising, shooting greater than 50 FG% as a team.

The Kestrels really benefited from the two way athleticism from the likes of Arissol, Busumbru and others as they dominated in transition, whilst also taking care of the ball as well, only one Solent player registering more than two turnovers.

Hemel's gutsy comeback gets it done

Down by four late in the game, Hemel pulled out all the stops to quickly reversed that trend before driving off into the sunset with a 19 point dub.

The win enhances their top-two aspirations following a fourth place finish in 2019/20 and a third place finish plus a playoff final appearance last year.

It was a team win, with Greg Poleon continuing his good work following an injury earlier on in the season and the likes of Sam Newman (12p/8a) and former Solent duo Tayo Oyefusi (10p/8r) and Johnathan Lashley (6p/9r) all flirting with double-doubles.

Elite 3-point shooter Jack Burnell chipped in with nine points after hitting three of his seven attempts from downtown.