FocusHoops' Darren Paul is back once again as he picks the best of the action from week 4 in the WNBL.

As a writer, commentator, podcaster and more, Darren had a total of five games to mull over before selecting his Player and Team of the Week. 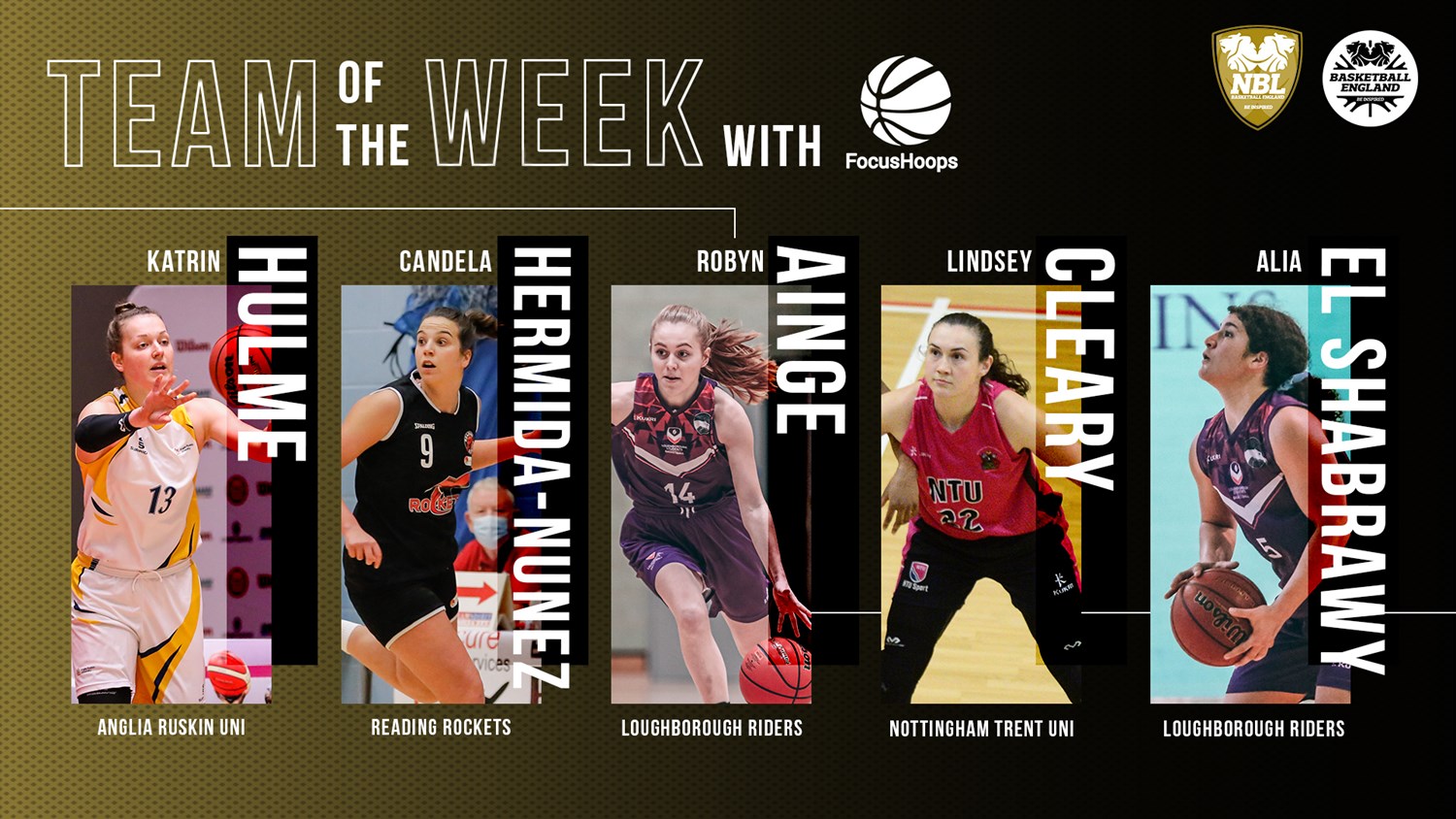 We have back-to-back Player of the Week awards in the WNBL, with Katrin Hulme leading the way once again. Her monster double-double of 21 points and 19 rebounds was key in ARU's 72-60 road win over Worcester Wolves on Saturday.

Hulme shot efficiently around the basket, hitting 64% from inside the arc, also converting well from the line to make 3-4 shots there.

The former playoff final MVP pulled down six offensive boards (tied with Courtney Gray), whilst blocking a shot and finishing the contest with three steals.

Hulme, a player who relishes the physical battle down low, took two charges during the game, gaining her side valuable stops in what was at times a tight contest.

👑 Another huge week in the WNBL for Katrin Hulme #GameTime | #NBL2122 pic.twitter.com/B9Kfu76Vkz

Loughborough’s Robyn Ainge had yet another excellent weekend in the WNBL as the Riders' captain led all scorers with 26 points in their narrow 70-64 win over the Team Solent Kestrels.

Ainge was one rebound shy of a double-double, taking down four offensive boards, dishing four dimes and swiping four steals. The impressive guard also shot the lights out from range, draining five triples at a 55% clip and was nearly perfect from the line, hitting 9-10.

In a hard-fought game, the Riders needed their captain to come up big and she did just that.

Candela Herminda-Nunez had a great game for the Reading Rockers as they clinched their first win of the season, a 67-49 victory over Bristol Flyers.

Herminda-Nunez was by and far the best shooter in the contest, finishing with 24 points, going perfect from the three point land and shooting at 50% from the floor. She also made 7-9 free throws on five fouls, whilst only committing two fouls of her own.

The Spanish guard supplemented her excellent scoring with two rebounds, four assists and two steals to cap off very good afternoon for the Rockets' captain.

📝 Loughborough came out on top in the battle of the unbeatens, knocking off visitors Team Solent Kestrels 70-64.

Lindsey Cleary was sensational this weekend despite being on the losing side as Nottingham Trent fell by just one point to the reigning champions Ipswich, 70-69 on the road.

Trent had a huge comeback in the fourth quarter after a tough third period left them adrift, and Clearly led the way with 13 points, four rebounds and two assists over the final 10 minutes. She was also fouled twice in an incredible individual display that had NTU on the cusp of clinching their first victory of the season.

Cleary shot with great efficiency, hitting 56% of her shots, all from inside, and made her only free throw. In addition, the American finished with nine rebounds and six assists whilst swiping two steals in a great individual display.

Alia El Shabrawy returns to the Team of the Week after a double-double performance for Loughborough in their victory over Team Solent Kestrels.

El Shabrawy finished with 20 points on 34% shooting, second only to Robyn Ainge for the Riders, and finished with 10 of her team's 24 points in the paint.

In addition, the Loughborough guard pulled down a team-high 14 rebounds, including four offensive boards, whilst contributing seven assists.

CoLA Southwark Pride took a commanding victory over the London Lions II on the road this Saturday with a 64-27 win in the local derby.

Isi Ozzy-Momodu had another brilliant display in just 12 and a half minutes, finishing with 12 points (55% shooting) 12 rebounds, with seven on offence plus one assist.

Funmi Amode also impressed off the bench, bagging 12 points on 83% shooting and added five steals in another excellent win.

The victory pushed CoLA to 4-0 and joint-top of the standings with Loughborough.

Loughborough Riders keep on winning in 2021/22, as they gave Solent Kestrels their first loss of the season on Saturday.

The Riders have two players in my Team of the Week in El Shabrawy and Ainge, but the Kestrels also play a great game.

Molly Danielson put up an excellent performance, finishing with 18 points and 16 boards while Faye Endean had 22 points, with six assists and seven steals in the losing bid.

Riders sit joint-top of the standings after an impressive start to the season and will be expecting more of the same when they head to Reading this weekend.