Adding NBL Division Two into the mix now that competition is underway, there are four Player of the Week awards up for grabs as we look back at Week 2 of the season covering the 5/6 October. Congratulations to all four players selected this week!

This week's winner is Landry Mayinga from University of Wolverhampton.

Going up against Stoke-on-Trent Knights and last week's D3 Player of the Week Kieran Jones, Wolverhampton managed to start their season with a narrow 92-88 home win thanks to 37 points from Mayinga.

Grabbing the first Player of the Week award of the new season in NBL Division Two is Manchester Magic's Richard Bell.

The talented forward helped his side get off to a winning start as the Magic defeated Derbyshire Spartans 80-70. Bell contributed 21 points to go with 17 rebounds, four assists and seven blocks for an efficiency rating of 40.

"I'm very pleased to have received the D2M Player of the Week award but I'm more happy with the way we have started our season in Division Two," said Bell. "Coming down from Division One, we have a point to prove this year and we are playing with a chip on our shoulders. I'm excited for the season."

Ipswich moved to 2-0 this past weekend following an 84-73 victory over Southwark Pride. Welham was unstoppable in the contest, finishing with 39 points, seven rebounds, four assists and five steals.

“It was a great team win, with everyone on the team doing their job," said Welham after receiving the award. "We couldn’t have asked for a better start.” 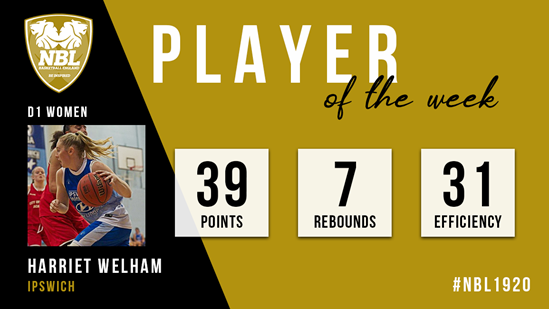 With all eyes on the rematch of last season's playoff final against Worthing Thunder, Solent's Ian Smith produced an impressive performance to secure the D1M Player of the Week award.

Defeating their local rivals 88-70 on the road, Smith contributed a huge 15 point, 15 rebound double-double. The Northern State University graduate also  added nine assists and a pair of steals, narrowly missing out on a triple-double.

"It’s an honour to receive Player of the Week!" exclaimed Smith, who had a 26 efficiency rating. "I’m extremely grateful for the achievement but more thankful for the team win! I'm really proud of the squad and I can't wait to get back out on the floor"

GB Women back in Manchester to face Belarus