There's another five NBL awards to hand out following some fantastic play in Week 4 of the regular season, covering 19 & 20 October 2019. Congratulations to all the players chosen this week!

The Division Three Player of the Week is Darnel Henry from Birmingham Mets.

"I am delighted to have been given the Player of the Week award, but I couldn't have played so well without my teammates; it was an excellent team win," said Henry. "We showed how good we can be when we play as a unit. The season has just started and we are still gelling, but I am confident we will do well."

The Archers got their season off to the perfect start as they easily took the Cardiff derby against the Celts 99 - 48. Deane contributed 23 points in the win and rightly deserves our weekly award.

“I really enjoyed playing in this weekend’s game," commented Deane. "We had a set of goals going into the game and I thought we did a great job executing them and had fun while doing so.” 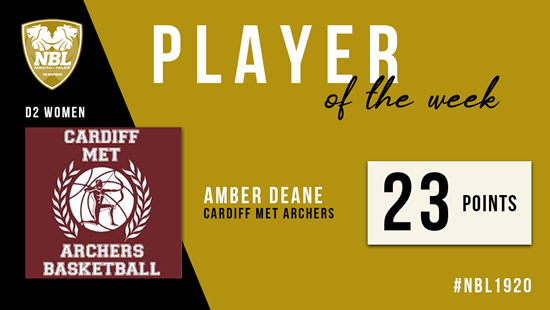 Jake Eynon has been selected as the NBL Division Two Player of the Week after his performance against Sussex Bears.

Ipswich beat the Bears 88 - 78 and Eynon went off for 34 points, adding four rebounds and four assists for an efficiency rating of 32.

"The win was all down to energy and concentration," said Eynon. "We did the things we can control to the best of our ability. Hitting shots and making plays just depends on how hard we work in the gym by ourselves."

For the second time this season, Harriet Welham has collected the WNBL Division One Player of the Week award!

After last receiving the honour in week 2, Welham was once again on fire as she helped Ipswich beat Thames Valley Cavaliers 97 - 72. The talented young shooter dropped an impressive 38 points, adding 10 rebounds and seven assists for a double-double and a huge 46 efficiency rating.

“It’s great to win this award, but this was a total team effort," stated Welham. "We have some key players missing so its great that everyone keeps stepping up.”

After helping Loughborough to a narrow 82 - 77 win over Bradford Dragons, Rasheed Worrell is our NBL Division One Player of the Week.

Worrell finished with a 34 efficiency rating thanks to 23 points on a 9/13 shooting performance that included a perfect 2/2 from beyond the arc. Add in a huge 15 rebounds to go with two steals and two blocks and it's clear to see just how good the Riders' man was in Week 4.

“I try and play hungry the rest will usually figure itself out," said Worrell. "We came out playing like that from the tip off and they’re a tough team so they battled back but we were prepared and came together to grab the win.”